"Two-year-olds like to be independent! Favorite words are "Mine" and "No" and "I do it!" Emotions take on a roller coaster-like quality as 2-year-olds can go from excitement to anger to laughter within a few moments. A great deal of time is spent exploring, pushing, pulling, filling, dumping, and touching". -Lesia Oesterreich, M.S. Family Life Extension Specialist Human Development and Family Studies, Iowa State University

Ahhhh, two year olds. For those of you who don't know: Olivia was a freak of nature. She was never "Two". She was always so sweet, a joy to be around, behaved, listened, understood and followed(!) rules. If I told her to stand right where she was in the store, she would stand so nice and quietly that I had been known to start to walk away and forget for a second she was there! If I told her not to eat crayons, put stickers on anything but paper, put her toys away- she did it and never questioned why, never tried to test me, just went with the flow. It was lovely. I did not have a true toddler experience. And then Luke came.


WHAT?!?! Two year olds don't listen?? Two year olds get into things like tampons, toothpaste and toilet paper?? They can hide under, climb up and jump off anything in the blink of an eye?? They yell things like, "Nooooooooooo, Meeeeeeeeeeeee!!!" while falling to the floor because you, not them, screwed on the lid to their sippy cup?? I have been freaking out about these things for the last few month and asking , "why???", only to have my mother repeat, "I don't know, because he's 2 perhaps!?"

So was it any surprise yesterday when Lysh came over with Hannah for a lovely morning of coffee-drinking-baby-holding-laundry- folding-company, that the two little Twos disappeared into Luke's room to "play" and weren't heard from for quite sometime, that, of course, they were up to SOMETHING???...(Note to any new Mommies out there: Silence Is NOT Golden!!) We had been enjoying this lovely peace and quiet while we chatted, and then all of a sudden we hear Luke burst out laughing, in that body-shaking, face-scrunched, makes you laugh too kind of way. And then its quiet. And then we hear Hannah burst out laughing in the same way. Quiet again. We looked at each other with that, "Oh, shit!!!" look and started to run back to his room, only to both stop in the entry way and say, "Get your camera!" because we knew we were about to bust in on a Two Moment. This is what we saw: 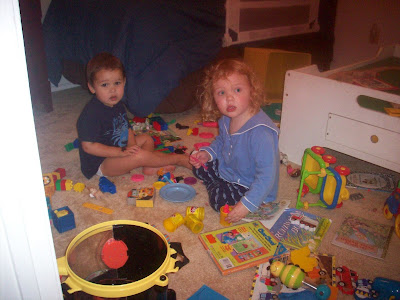 NOT ONLY, had they taken EVERY book off of Luke's shelves, they had gotten out all of his cars, trains, Little People, blocks, musical instruments- and when that hadn't satisfied their Two Year Old quest for fun...they found the Play-Doh! I had gotten it out earlier and had them all set up at the kitchen table, but when they had lost interest in it, I had shoo-ed them back to Luke's room, putting the bucket back in the toy room without even thinking- it is usually put up in my craft closet, so things like this DON'T HAPPEN! Well- want to know what they had been doing, that they thought was HIL-AR-I-OUS??? Each had their own little yellow Playdoh container and were taking turns using plastic knifes and forks flicking chunks of Plahdoh out into the air (read: all over the carpet!) Why is this so frickin' funny, you ask??? Because they are Two! Do you not love the "Oh, shit!" looks on their faces?? Love it. And them.

(And per Hasbro.com's FAQ regarding getting Playdoh out of the carpet, I let it dry completely, used a stiff brush to lossen and vacuumed. Viola! At least I know our children are not the first to go a little nutty with the 'doh.)

Laughing so hard while at the same time making mental notes to self:

(I hear if you repeat something 3 times it sticks...unlike Playdoh.)

The look on their faces! HAHAHAHAHA
You don't beat them because they're so cute.
And they're perfectly normal two-year olds. I keep telling you.

How did you get your cute background? Love it! I can't get past the basic ones...hmmm