I did not go a little nutty over having the kids pictures made. I did not inspect every inch of them while giving them baths 10 minutes before we walked out the door - so no one would have time to get dirty-to be sure there was no trace of old rub-on tatoos, not one hang nail, not one split end that might sneak its way onto this precious film. After I got him dressed, Luke did not promptly find a cup of BunnyWhop and spill it all over himself.

I did not secretly enjoy this day of pain for Jason because he wasn't so darn cute all hopped up on drugs after he didn't have a molar pulled this morning. He did not say drug-induced silly things like, "Morgan, you look like a little Thanksgiving turkey." or "Oh, look a Disney movie is coming on the Disney channel."

I did not tell Luke after he had done something fabulous that he was a "Genius!" He did not reply, "I'm not genius, I'm a pooper."

I did not slack off on dinner for the second night in a row, and serve my entire family DIFFERENT Weight Watcher microwave meals at 4 minute increments. I did not serve them in real bowls to try to make myself not feel like such a terrible mom.

I did not have a little mini-bratty-fit while trying to watch Designed To Sell, when Luke came in demanding to watch "TomenJeawry" right as they were about to do the big reveal. He did not proceed to throw an all out fit to which I did not have the energy at that point to fight. I did not walk out of the living room saying, "Why don't I never get to watch my stinkin' shows?!" under my breath only to over hear Luke say to himself, "I watch my 'tinker show now." Ugh.

I did not have a conversation with Jas last night about going to sign up at the gym while sharing a pint of good ole Blue Bell ice cream while sitting on the couch watching Entourage. I did not get geekily excited when the hall tree we have was in the background shot of the cabin they are all staying in while Vince is filming.


I did not seriously discuss with Olivia the possibility of a vet hospital near our house being so fancy because it was built just for poodles. We did not later decide it must be so nice because its for mommy dogs who want a pretty place to have thier puppies. I did not drive the rest of the way home with the biggest, silliest smile on my face. It was not put there by Olivia's sheer adorable-ness.

I did not accidently steal one of the bows from our photographer that she had let Olivia borrow. I did not promise to put it in the mail today, but not only before I didn't take hilarious pictures of Morgan. Jas did not comment that she looked like she should be in the Moulan Rouge movie. He is not so funny and high as a kite.
Morgan Jane did not not know what was happening to her... 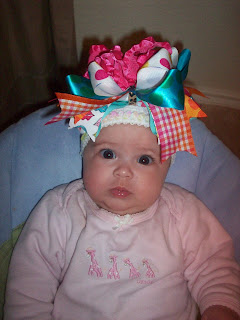 Morgan Jane was not scared that she was unable to move her head under the weight of this huge ass bow... 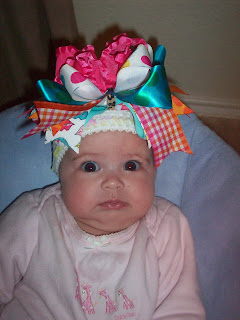 Morgan Jane was not so happy when I took it off her... 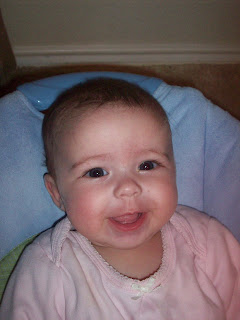 oh my god...i did not just pee my pants! that picture of morgan "bow-head" yarbrough may have to become my new screensaver. oh, and did you realize that that song you told me about is a break-up song, right?

You are both too funny. Every new pic you publish of her becomes my favorite one.