So, believe it or not (and for ALL of you who know ME, this will be a SHOCKER!):
I cooked Thanksgiving Dinner.
And it rocked.
Yes, I did start this huge project at 12:oo yesterday afternoon. And yes, I did have an "Oh, shit!" moment when I realized I do only have ONE oven to cook FOUR different things at different temperatures at the same time in. And yes, I had a nightmare last night about having to make Martha's FAMOUS cornbread stuffing. But! I tackled the challenge and we feasted til we were all sick.
Olivia: Whoa, this feast was too "feasty"!
This is how it went down:
Olivia and I made Martha's dressing ahead of time last night. I will admit to you all that I cheated (just a little.) I used pre-made cornbread crumbs- BUT! Miss O and I dried out and crumbled a million pieces of white bread on the cheese grater with our own bare hands!
Me: Come on, look at us! Who needs a stinkin' Cuisanart?!
Olivia: Us.
Any way!, I seasoned it and seasoned it and seasoned it til it smelled right and low and behold, minus a few texture issues, it tasted almost just like Marta's!!! Jon and Jen had come over with Bryant, so I made the boys taste test it, and I got two thumbs up! Woo-hoo!! I had started working on defrosting out sweet little turkey breast at 8am this morning, and he was in the oven all basted and seasoned by 11. Yes, the Clorox Queen was in the house, and I washed, cleaned and sanitized about a million times thanks to to my little friends here: 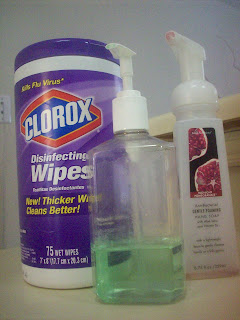 To my own credit, I did not poison anyone (although I no longer have skin on my hands.) While I was working on the bird, Jas and the kids went out front and raked the ka-gillion leaves that were covering our yard. My Mini-Martha Stewart came in with her pockets full of acorns and asked me for a clear container as she had decided that she wanted to make a festive centerpiece. Alas, I didn't have one, so we settled for a platter. She added leaves, I added a candle and voila! Look how cute! 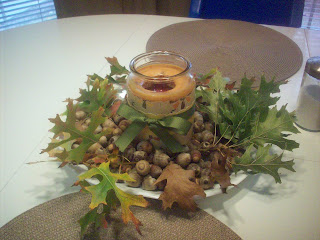 So for the next four hours, I followed my Type A food prep plan: 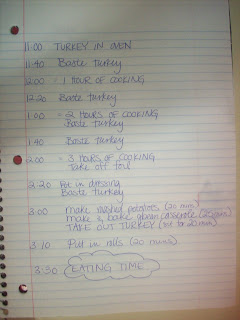 And had everything come out of the oven at the EXACT same time, just as the turkey was ready to be carved. Finally, it was time to eat! I tested the temp of the turkey with my new handy-dandy food thermometer, and it was d-o-n-e. So of course, after 4 hours of basting every 40 minutes, making sure his little foil tent was positioned "just so", I HAD to taste the bird to see if it was okay. All morning long, I had visions of the Grizwald's Christmas turkey that Clark cuts into and it busts open and deflates. But, oh. my. gosh. It was deeee-lish! I couldn't believe it! Jas couldn't either! We got so excited to eat, seeing as how everything was actually turning out okay. Jas had bought sparkling grape juice for Olivia as a joke. 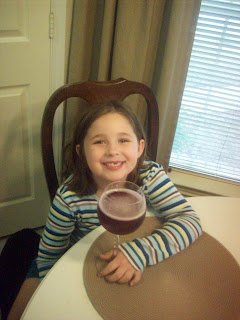 (She's always trying to be "grown up" and she thought it was FABULOUS! I know, I know...probably shouldn't be encouraging underage drinking...) Anyway, we all sat down to eat and some of us couldn't wait to dig in (Luke was finished eating his meal of 3 bites by the time I sat down). I do think the grape juice got to her head because soon O and Jas started making McDonald-esque "Thanksgiving Biscuits" which they thought was hil-ar-ious. Nice. 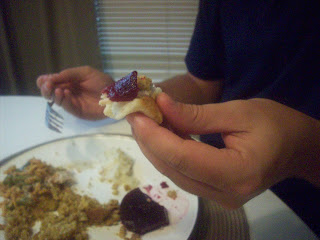 Don't be alarmed, but while we were stuffing ourselves silly, we were mugged by a very short person who's not really into eating at the moment. 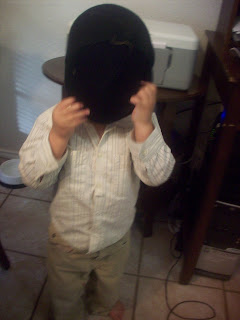 Lucky for him, he was also a Cowboys fan. 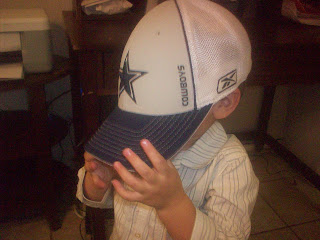 After we were done, (7 minutes after we sat down) the kids sat with Jas and watched the game, I cleaned up the kitchen, went upstairs and passed out snuggled with Morgan watching House Hunters. Who knew cooking was so damn tiring??
I am so thankful for all of the many blessings that I have received in my life, and I am SO glad that one of the best gifts asked me to stay in town this year so we could have a little Yarbrough family Thanksgiving together. It was so sweet and fun. Might even do it again.
Posted by Anne at 9:28 PM

you are one brave women... i'm not ready to take on that BIG job of the thanksgiving meal!!!