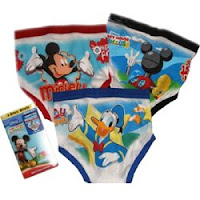 I would not decide to pick a random day out of the air and decide it was time to start potty-training Luke- full force. I did not pick yesterday.

I did not have a sad Come To Jesus moment with myself when I realized I really had no part in potty-training Olivia, and really had no idea what I was doing- Come on, Mommies just know these things! I did not doubt my patience with the whole process and consider going back to work full time just long enough to have someone else do it for me.

I did not make Jason take us both to Target where I did not proceed to let let Luke pick out every package of undies with characters on them that he knew, hoping they would be modivation. Because it couldn't be that many, could it? Oh...just Mickey Mouse and Goofy and Donald and Handy Manny and Elmo and Big Bird and Ernie and Lightening McQueen and Mator and Thomas the Train and Duncan and Percy and James... He doesn't know every character ever created by Disney, PBS, Noggin, Nick Jr. or Sprouts because he doesn't watch that much TV...

I did not have a BIG 2-Year-Old dicussion with Luke about why we do not pee pee on Mickey Mouse because he would never pee pee on us. That's just plain silly.

I did not sing 18 rounds of "Bringin' Home A Baby Bumble Bee", "10 Little Indians" and various other kid songs just to keep him on the potty, only to finally let him get up and have him go 2 minutes later. (From his room: "Oh, no! I tee-teed on Thomas!") Damn. I did not continue to be about 5 mintues behind the pee all day.

I did not feel totally discourage and I did not sit at the computer and read every article I could pull up about potty-training during the two hours of naptime, only to be more confused than ever about what I SHOULD be doing. I did not almost cry.

I did not do a little ghett0-rigging, and let him wear his undies under a diaper after we had been through 20 pairs by 3pm. That would be giving up a little too soon, and I am NOT a quitter.

I did not feel totally suckered when he came running to me in the late afternoon and asked to sit on the potty. I did not run with him excitedly to the bathroom like a fool. I didn't think "Yea!! This is it- He's getting it!!!" only to then have him ask me to sing the "Super Duper Pooper" song to him and once I was finished, he did not hop off the potty as if it was the place where he only sits so I will sing silly songs to him. I have not accidently turned the bathroom into our own little version of Kindermusik.

I did not think that maybe I am a total Potty Training failure, when at the end of the day the score was: PeePee in the Potty- 0, PeePee In the Undies- 8.

Anne~you are seriously one of the funniest...

you are so funny - lets do get together... you tell me when, you have the youngest kiddo....