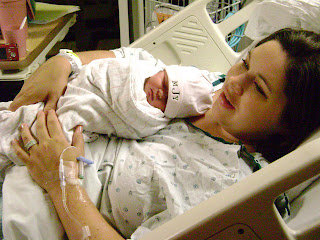 Well, I am still high as a kite and hope this all makes sense, but wanted to let everyone in on the story of Miss Mj's birthday.

Jas and I arrived at the hospital around 11:30am, checked in and settled into our pre-op room. As I sat there and dreaded the awful IV I knew was coming my way, we met our nice nurses- one who happened to be the head nurse of the whole unit, so I knew I was in good hands. Jas finally got to meet sweet Dr. Zhang and my anestheiologist was SO NICE!- like a friend's mom kind of nice. An hour later, we were ready to head out, and they set Jas outside the door and I went in for all of the lovely c-section prep. One nurse joked to Jas that the OR was B.Y.O.C- when they called him in, he had to choose a chair from the hallway to bring with him! And seriously, there were like 5 different kinds of chairs out there, so he really had his pick. So random!...

Morgan was born at 2:49pm and we were all in for a shocker! Not only was she breech, she had her cord wrapped around her neck TWICE! and in all of her breech-back-flipping, she had managed to tie her cord in a perfect knot! While I was dreading having to go through another c-section recovery- the nurses told me she would have been in SERIOUS danger coming out the other way- and would have had to be born via c-section anyway! Little stinker!

All of the OR docs and nurses kept trying to guess how big she'd be considering I was as big as a house coming in there. The anestheiologist said she had seen me in the hallway coming into register and thought I was carrying twins! (nice.) After they had taken Moragn out to the nursery and were working on putting me back together, I guess the suspense was killing them, and they called down to the nursery to see the final tally! But to everyone's surprise she was just 1 ounce bigger than Luke at 7 pounds, 14 ounces. She was the same length as O almost at 21 inches long. All I can really remember about seeing her for the first time was all of that fabulous black hair- JUST LIKE O! It so long in the back- almost like a newborn mullet!

I spent the next three hours in recovery waiting for my spinal to wear off, and they brought her in so we could hang out with her. I still had the shakes and really didn't to hold her until that evening though. But that was when we discovered she has one little dimple- JUST LIKE O! Too cute! My mom and dad brought the kids up once I was in my room and Martha came too. Olivia was the first one to get to see and her she was SOOOOOOO thrilled! She held her and rocked her like a professional! Poor Luke didn't know what to think and refused to look at her, and wouldn't even kiss me good-bye! We all just hung out on Friday, and Jas was able to go home and take a nap. He had to sleep in this horrible vinyl recliner (if you can call it that!) for the first two nights, so he ran home and slept every time my parents came up to sit with me! On Firday night poor Morgan billirubin numbers came in and they were kinda high, so they took her all night and all day Saturday in the nursery and kept her under the lights. It worked out well though, because my parents brought the kids back up, and I got to visit with Bubs and O without her in the room- He was totally back to his normal self! When I was making one of my mandatory laps around the unit, I spotted a cot outside someone's room who had just left and hunted down my nurse to see if Jas could have it. I was totally the best wife ever when he walked in and saw it- no more "sticky chair"! That night we had our sweet Baby Bistro dinner, and they brought up our special order on a silver tray, complete with champaign glasse and sparkling cider- it was really cute! We toasted to getting to go home the next day- I was starting to really miss my own bed!

We got the okay to come home early afternoon yesterday, and I have been religiously taking my pills and keeping my feet up. This recovery has been the easiest so far, but by no means without it share of pain. Thank goodness, I had so many TiVoed shows to catch up, so staying in bed has been nice. HA! My mom decided to stay an extra week or so, so Martha has left to go to Alabama to see her mom. She hasn't been able to travel for over a year because of Gary, so I am SO happy she is getting the chance to go visit. We are missing her already though! Luke has come around and is Very sweet to Morgan. Luckily, there are enough people here to play with him and give into his every desire, that she has't really rocked his world. He liked to peek in at her in the port-crib and treis to give her his bink when she cries. He loves to go around the room and give everyone "high 5s" (including Mo) and he stopped by her bed yesterday to make sure he gave her one too! Pretty sweet...Other than that, not much else to report: MJ goes to the doctor tomorrow for her 5 day check-up, and Auntie Margaret is coming on Wednesday- CAN'T WAIT!!! 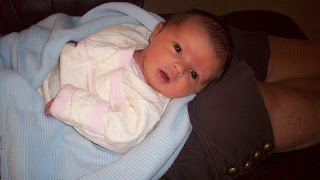