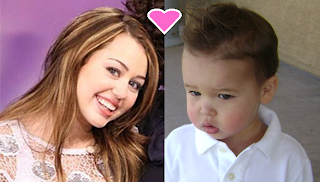 Jason has always joked that there is something in Disney movies and shows that seep into our children's brains and make them crave more, more MORE! Take for example Luke's wacko obsession with Wall-E from only watching the preview commercial. If we didn't rewind it and let him watch it at least 5 times, he would throw himself on the ground and have the hugest fit!!! So, the other day I am pushing the cart through Wal-Mart, on my way to the shampoo aisle, when I hear Luke say, "Oh, hi Hannah" just as calm as you please- like they are friends who run into each other at the Wal-Mart all the time. I was paying more attention to my list than to him, but then stopped when I realized what he had said. I turned around and sure enough- there on the end of the aisle we had just passed was a huge HM display with hair-ties and accessories- there she was in cut-out form, almost life size! "See Hannah! Luke see Hannah"- I had to go back so he could (in his own sweet Bubbie's way of showing affection) smack her. THEN! Yesterday we were having our dance party, and were listening to the kids song channel when the first three notes, not bars mind you, but NOTES of the HM show's theme song came on and he says "Watch Hannah? Watch Hannah?" Totally confused as to why the song was on, but the show wasn't! ARE YOU KIDDING ME?!?!? Kind of scares me to think of the frightening control Disney has over my son...and daughter... or is it the other way around and Olivia is the one with all of the control over him??? Funny thing is: We are trying our HARDEST to teach him his colors and guess what the only color he gets right EVERY time is?... Pink. Makes you wonder... HA!
Posted by Anne at 2:51 PM

You could turn it off- just sayin'.

I love his Bubbie ways of expressing affection, especially the forehead knock.

marge and daddy got here okay- still the best dad in the world. she's going to look for apartments with Stephanie today. There's a $5000 painting in the hall she has to deliver to its owner.

The head costumer gave me something for MJ that I think you'll really like. So kind.

I wonder the same thing sometimes about noggin too -

I would really LOVE to see you when you get back... your the only one i know out here with kids and Miss O was like my faux neice since all my family is back in AL... i used to love playing with her at that house in Coppell... I still think she prepared Brannon to be a dad.....

When you get back here, please let me know, I would love to see you and start hanging out. I was a good shopping buddy, remember the gold shoes and shirt we found for you to wear.... ?

Good luck with ms morgan jane... we will be praying everything goes smooth...