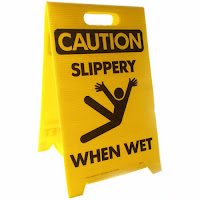 Poor , poor Jas! Yesterday afternoon he was up at the hospital and the doctors had asked him to leave the room for a few minutes while they talked to Martha. He went downstairs for awhile and then realized he had been gone longer than he had planned, so he started to rush upstairs. He said a couple was turning the corner the same time he was and he tried to side-step them and then SWOOSH! His legs flew out from under him and then SPLAT! He landed flat on his back right in front of the nurse's station! Of course, trying to make light of everything, he blurted out a quote from the movie Friday and said, "I want $50,000!" He said no one laughed at this little joke, but they ALL came running and helped him up and asked if he was okay about a million times. He quickly got back to Martha's room, but he said other nurses kept coming in and checking on HIM! Even the cardiologist looked over Martha, left and then came back in and said he heard Jas had fell and wanted to know if he was alright- thought maybe Jas has gotten lightheaded and passed out!!! To make him feel better, I told him maybe all the nurses thought he was handsome and wanted an excuse to fuss over him, or they were making sure he didn't turn thier post into the Jason Lee Yarbrough Wing of the hospital!!! To which he replied: "No, they are all probably out there waiting to tell anyone who didn't see me and then telling them to go in and see the dumb ass who flew through the air! (in a girly-voice:'Just go in there and pretend like your worried about him!')" ...Yea, that sounds more like it. HA! Poor guy has a bruised tush and an ego to match.
Posted by Anne at 12:01 PM