...When we were discharged from the ER, I texted Jas to send for another cab and I headed outside to get some fresh air and to wait. One pulled up two mintes later and as I tried to get in, another couple came out and it turned out that one was for them. No sooner had I sat back down than a shady tan min-van with a "For Hire" light-up sign on the dashboard pulled up. An older man got out, and asked if I was Anne. I was a little taken aback seeing as how Jas said he was going to call the same company. I said yes, and just to check- I asked him if he took credit cards as we were getting in. Yes, yes- he told me. I laid my now sleeping baby down on the seat and told him that I needed him to take me to the Animal Kingdom lodge. He started driving and then starts to tell me that he needs $14 to get in the gate? Huh? He didn't speak English every well and we were clearly having a miscommunication problem. Finally, after much discussing, he understood that I wanted the resort, not the park.

I texted Jas right away:  "where did you find this guy? super shady."

He wrote back: "called the same number. what's wrong?"

I texted him back that this guy was in an unmarked mini-van, wasn't understanding me very well, that I wanted him outside the hotel when I got there... I asked the cab driver how long it would take us to get back to the hotel so I could call my husband and let him know. 15 minutes he said, so I called Jas to tell him, blaming my wanting him outside so he could help me with Morgan Jane, not because I thought anything was wrong. The driver got kind of snippy and kept saying, I'll get you there quickly. I'll take you right there. I assured him that I understood, that I just needed my husband's help. I knew in the pit of my stomach that something was off. His car was a mess, he was kind of a mess... there was half eaten melons sitting on the floorboard of the van...

Then I get a text from Jas about a minute later: "where are you? tell me everything about this guy. his car. everything."

That's when the fear set it.

He called me and told me that my cab driver had just called from outside the ER, wanting to know where I was. Jas asked them what they were talking about- that I had aleady been picked up. He told me he didn't know who had picked me up, and that he wanted me to hang up and text him with every detail about this guy. That he was about to call the police. I felt like I was in that scene in "Taken" right before the daughter gets kidnapped. I started to FREAK OUT.

And it was at this exact moment that the cab driver starts telling me he was going to take me to the ATM so I could get money. I told him I didn't need to get money and he kept insisting that he would take me and I could get some. Please let me tell you, that I had one of those "This can't be happening to me!" moments. There is no way that I went on vacation, ended up taking my sweet baby to the ER, and got kidnapped and mugged by a crazed cab driver. No. way.

Jas kept texting me every 5 seconds. Turns out he was at breakfast with everyone when he got the call from the cab company and had been pacing outside- his phone set to the Orlando PD if I didn't show up in the next 5 minutes.  While we were flying down the highway he gave me his card (which was covered with random numbers and foreign writing on the back. Scary.) and I really realized that this guy did not work for Yellow Checker Cab, and that something went wrong somethere along the line. I just wanted to get to Jas as fast as possible...

I will say my driver got us back pretty quickly and I have never been so happy to see the gate at our resort. When we pulled up, I pretty much threw Morgan Jane out of the car at Jas and lept out. He guy smoozed Jas, giving him a song and dance about taking us wherever we wanted to go. It was so bizarre. We walked back downstairs to where everyone was having breakfast and I sat down and lost it. WHAT THE HELL JUST HAPPENED??, was all I could think. Why did my baby get hurt, how did that driver know my name??? Was I really in danger?? It was too much for one day. Sometimes you just need a good cry. And a strong cup of coffee. All we can figure now that we look back is he must have tapped into the cab company's scanner and goes around scooping up other people's fares. Shady. Shady. Sha-dy!

Luckily, everyone had just planned on hanging out at the hotel until we needed to leave for the airport, and it ended up being one of the most relaxed and enjoyable days we spent together.

The kids and B on the hotel playground... 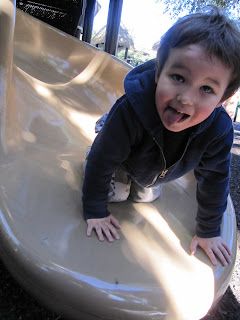 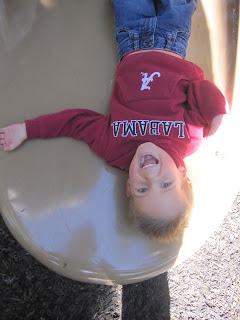 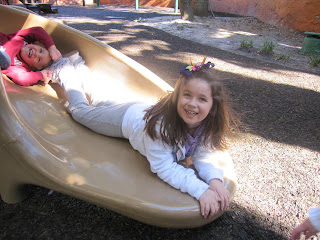 Luke and O dontaed to the Disney Animal Conservation fund and got to make Chirstmas ornaments out of dies Ostrich egg. They turned out really nice- who knew? 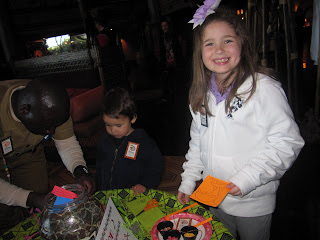 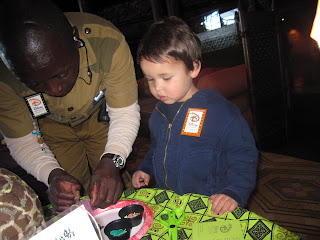 Right was the kids were finishing their crafts, we heard some fabulous drumming coming from the library. We walked over, mostly because I wanted to see if Morgan would rock out- she's stared dancing so cute lately. When we got there, there were several hotel staff members playing, and they invited my kids to join them. Soon the whole library was filled and everyone was having the best time! The instructors stopped and taught a little geography and science lesson. 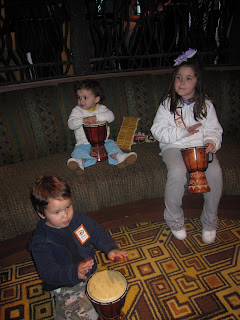 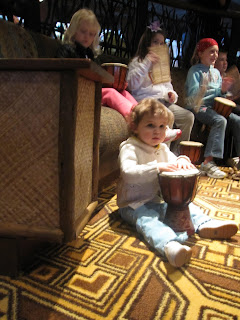 Here's Bubs telling these men from South Africa and Uganda "where Texas is"!

They thought he was hilarious! 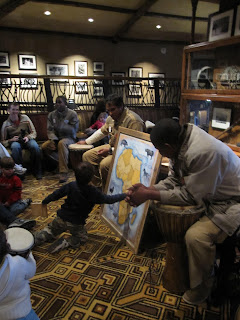 Oh my gosh Anne! Very Scary...I probably would have been about ready to jump out of the cab if he slowed down at some point. Jas must have been completely freaked out! You sure learned so very much that you hadn't really planned on this trip didn't you:-) I am so glad you all made it back in one piece. No more ER's, taxi's....anything else?!

OMG - I was breathless reading this! I was so scared for you! I'm so glad you got back to the Lodge and the weirdo didn't stop at some random ATM. It's amazing how strong we can be in the middle of a crisis and afterwards when it's over and we're safe have a much need meltdown and release.

I really enjoyed reading your installments of such a wonderful trip to Disney World. We've never been there but have been to Disneyland. Disney World sounds so amazing and different. Thanks for sharing your adventures.

OMG! I was freaking out reading this, even thought I knew you couldn't be writing it if everything didn't turn out okay. I can only begin to imagine how scary that was for.
I'm so, so, so glad y'all are okay.

You are an amazing writer! I had a sick feeling in my stomach reading this! WOW!! You must have been so scared!

We need to get together soon!

HOW MANY times have I told you not to get in a mini-van cab with a shady driver?

And though I had a calm, counselor exterior while you were telling me this story, inside I was going 'ACK! ACK! CALL THE POLICE! NOW! Get him OFF the roads of Orlando!"
Whew.