So... We've all been sick and there hasn't been anything worth anything going on around here... I've been getting to do ALOT ot TV watching though, so I thought I'd give a shout out to my new favorite shows (just in case you don't have enough to do that you need to add a few more TV watching hours to your day!)

I've also added a "Husband Watching Rating (HWR) based on how many times during the show does Jas asks me when its going to be over! ha!

My Fair Wedding With David Tutera 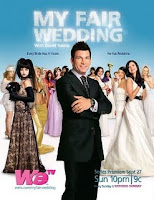 OMG. I want this guy to be my best friend. He is a doll, and is so kind and sweet to these clueless women! You will die at some of the themes these women come up with. One girls wanted "Country Bling" and had hot-glued colored rhinestones to those brown paper-mache pigs you can buy at the Hob Lob! I would not lie to you. Sometimes his decor is a little over the top (and do all brides really need to change into "party dresses" for their receptions???) but I love him. LOVE. HIM. I would make up a crazy wedding and buy hideous gowns and make bouquets out of candy (yes, someone did that, too!) just so I could meet David!
HWR: 2 (and I think only because its an hour long and it is about weddings!)

Every episode of this show gets better (and I missed the first two, which I'm sure explained alot more about her husband's scandal) but Julianna Margulies is so likable, and the cases are great! I LOVE LOVE Kalinda (the in-house investigator). She is such a bad ass. Watch it. Seriously. (You can get it On Demand too...)
HWR: 0 (He loooooooves it too- always gets mad if I turn it on when he's ready to lay down because he knows he has to watch it! heehee)

I hate to admit this, but I think this is one of the cutest reality shows ever. They are such a cute couple: I love how she's wacky (not to mention her assistant, Matthew "Jacobi"- hilarious!!!) and he is so straight-on and serious. I love how he puts up with her and humors her. They are precious. Seriously mindless fun. There are always marathons on the weekend, so make a pot of coffee, stay in your jammies and catch one. Promise,  you'll love them.
HWR: 1 (He thinks she is ridiculous - in a silly way- but watched 2 hours of this 30 minute show with me this weekend while the kids were napping. So there.)

(I promise you, I never watched this channel until we all got sick!) 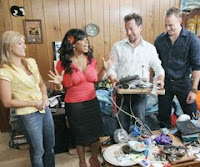 We only like the ones when Nicey is the host. She is so funny- and the team is equally cute (although I can't stand the colors that Mark paints the rooms- tacky, tacky.) We really started watching this in the hotel when we were in Austin at Thanksgiving. It was the Messiest House In America winners episode which was 2 hours long and had come on at like, 11pm! We were holding our eyes open to watch the end!!! This woman and her daughter were 10 kinds of crazy. They had so much stuff in their house that the team had to rent out a WAREHOUSE! for the "Yard Sale" and it was set up like a department store. They made over $17,000. $17,000!!!! And then at the reveal, the mom takes one look in her new, cleaned out and organized closet and went psycho screaming that they had stolen her purses and stormed out of the house. It was CRAZY!!!!! Jas was hooked. He's in our room watching it right now.
HWR: big fat-daddy 0!!! He loves it! 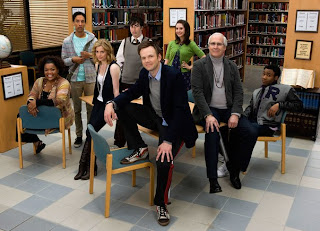 I have loved Joel McHale for years thanks to The Soup. I think he is hilarious, so when I found out he was going to be on a sitcom, I was first in line.. on my couch. I was a little scared because I had high hopes for Parks and Recreation and I couldn't handle it. Made me twitch. Scared they were going to be the same odd slow pace. But OH MY GOSH! Community is so funny there are simply no words. Every character is greatness. The story lines are so silly and over the top. And did I mention it SO funny???? We look forward to Community night each week. Be careful: If you TiVo it, make sure you tell it to record 2 minutes after the ending time so you don't miss Troy and Abed's shinanigans.

Now, add these to Big Love, The Biggest Loser, The Bachelor, Keeping Up The Kardashians and House and I have plen-ty to keep me occupied while I fold laundry.
;0P
Posted by Anne at 10:20 PM

You can watch the first two episodes of The Good Wife on TV-Dome.net --the scandal is quite scandalous.
You can also watch White Collar and Castle (adorable!). And Leverage.
I do a lot of TV watching up here.