DIY Does NOT Apply...

Jas has deemed this the "Year Of Just Living" - which was told to me when I told him of the grand painting plans I had for our master bedroom. Nope. He said he is out. He doesn't want to do anything this year. WHAT?!?!? Just when he was becoming my decorating/ crafty-project P.I.C.! Ugh. You would think after knowing him for almost half my life, I would know when he's not bluffing. But, nooooooo, I figured I could woo him, guilt him, or cry if it came to it! Or not.

I have a medium-sized barn star over our TV in the living room. I love tin stars, have in them in almost every room. But it has always bugged me a little that it was smaller than I really would like. It looked a little dinky up there to me. So I went in search of a larger star...but I found something even better at (guess where? where else?!) Hob Lob. Metal scroll-y pieces. I'm telling you! They sometime put the best treasures closest to the floor! They were small, like 10 inches long and they had them in reverse of each other and a little alarm went off: hello! hang them on either side of the star! Loved the idea and stalked them until they were 50% off.

I brought them home, painted them, sanded and distressed them and was fired up to get them on the wall. So, like I normally would do, I asked Jas to come help me. And you know what he said?? "No."

He was. So I got the leaning ladder out of the garage, and leaned it up againt the wall in the living room to show that I was serious, these guys where going to be hung up.

Nothing. So I leaned the ladder on the right side of the TV careful not to bump anything. I shook it a few times to make sure it wasn't going anywhere, climbed up and then called Jas. Got him! He came in the room and I asked him to tell me when it was straight. He was mad he got dooped, but helped me. Then he left. So I moved to the other side of the fireplace, and as I was climbing the ladder I had one of those moments where I thought, Damn, it sure would be a nightmare if I fell. And I started to do a quick inventory of all of the awful things I would hit: the TV on the wall, the big wooden mantle, the tile hearth, the large media cabinet... I got up there and called him back, begging him to just stand there and tell me up, down, left or right. He did it, but with very little enthusiam, and sure enough when I got down the left scroll was too close to the star. Now, I am sure I am the only person on the planet that would be bothered by the 1/2 inch discrepency, but it had to be remedied. 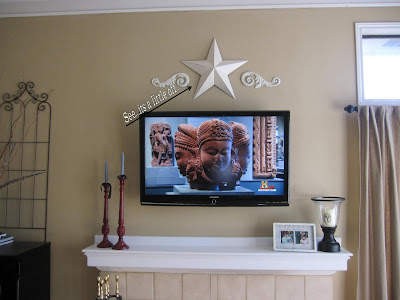 Jas told me to leave it. It was fine.

(This is the part of the story where my mom would say, "Alright, hard head." Yeah.)

I climbed back up the ladder, and I guess I went one rung too high, because as I hooked the back of the hammer around the nail I wanted to remove I heard the most awful metal clink sound and down I went. The rubber bottom of the ladder is on a hinge and had flipped up, and on our slick floors, the whole ladder started sliding down and backwards. And in that moment I ran through that laundry list of what I was going to hit in those 2 split seconds. Then WHAM! the ladder slammed into the mantle, it flipped over and I was able to roll off, but not before I hit my ankle, my shoulder and worst of all, the inside of my leg. 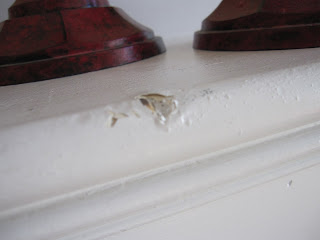 (thank you mantle for breaking my fall. {hugs})

When the ladder hit and flipped it wasn't a pretty sound, and luckily Jas came running. I just sat on the ottoman- in shock, but thanking God that I wasn't more seriously injured and embarrassed that I had acted like such a toot. And in true Anne fashion, I had one of those laugh-like-a-psycho-then-burst-into-tears moment.

So, maybe he has a point. Maybe decorating has become too dangerous. Better to live...

(Then again, maybe I can bribe a certain someone who understands how much looking at that 1/2 inch-too-close-scroll will make me slowly go insane until it is moved to come help a sista' out!)

Well, hopefully MR. Stick in the Mud learned his lesson that being such a stick in the mud isn't always the best route!!! Sorry you got hurt..and the mantle too, but guess what? He'll have to fix it for you, therefore breaking the new year resolution, therefore leaving you wide open to new possibilities!! Aha, I see how you work :-)