We had to have an intervention at the Yarbrough house.

Seems as though one of our family members was suffering from a serious addiction.

It was interferring with their life.

They were no longer enjoying everyday activities.

They were obsessed with getting their next "fix".

They were angry and ugly when they couldn't have this one thing they wanted.

So in the end we had to pull the plug and start the detox cold turkey....

We had to take away the Wii and ask Mario and Luigi to skip on outta here for a while... 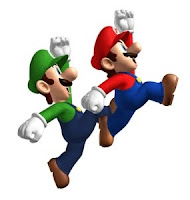 We needed our Luke back.

Our poor Bubs suffers from a slight case of OCD. Once he has his mind set to something he wants to do, it is next to impossible to get him out of that mind-set until its been full-filled. He turns into a little Rain Man. I used to just chalk it up to being a preschooler, and wanting things to be "just so"... but we are starting to think he has a bit of an issue. And playing Mario Bros. had become a serious addiction. I know he's just three, but I'm being serious here. Serious. Addiction.

He would go to bed asking that we set up the Wii so he could play it right when he got up, and if we didn't he would spent the entire day asking us when he could play. If we didn't let him play, he would literally get pale and shake and be a moody-mess. Like a junkie. It wasn't pretty.

Because I know how much he enjoys playing Mario Bros. I did everything in my Mommy-Power to find ways to let him play in  a very controlled manner: having to earn minutes by playing with toys, setting an egg timer, taking away the remotes after each time he played until there were none left... Nothing really sunk in with him, and I couldn't stand that once the egg timer went off, he would save his game and get off, but he would then spend the next 5 hours asking me every 2 minutes when he could play again. Junk-ie.

He was freaking me out. I couldn't take the crying and shaking and arguing it was causing. The only solution Jas and I could agree on was to simply take it out of the house. (Well, its actually hooked up and hiding behind the TV in our room, but not even Miss O knows that!) He came home from school yesterday and asked here it was. We simply told him it was gone, and amazingly enough- he didn't ask where or when it was coming back. But is hasn't been 24 hours yet, so we'll see how the withdrawl goes... Lets hope its not too painful...

I'm here to back you up- it was teeny tiny 'Basketball Diaries".
Not good at all.
I'm SO proud of you and Jas and your committment to being good parents.
I know this is hard on all of you, but you will triumph.

At least you recognized it was a problem.....and is it still hooked up in your room so someone ELSE can still play mario Bros....heh-hemmm..... :-) Ha-ha!! Hope he doesn't drive you batty asking all day.