May I have a word with you? Yesterday I dolled my sweet children up in there red and white best, loaded them all into the car and braved the 20 degree windchill weather with promises of seeing you: The Great Santa Claus.
Humph! Or should I say, "Ba Humbug!"???? When we approached your beautiful carousel-like set-up, I saw Miss O's eyes get wide with excitement. I whispered to Luke- who had NEVER met you before- "Look, Bubies, do you see him?!" and I saw Jason's happiness that there was NO LINE! We had you all to ourselves! But then the playfull fun of it all went out the frost covered window. I found it a little off-putting that the first thing your "elf" asked us was what size photo package we would like to order. Nothing says The Joy Of Seeing Santa, like forced consumerism! And when I asked your elf if we could just see you and take one of our own photos since they are so expensive, she replied with a festive, "Yea, but ONLY 2." When she turned to you and told you we were "just visiting", I did not know this was Santa Code for "They are not paying us, so don't act like you care about them." My children came up to you bouncing with joy and you didn't even speak to them above a whisper! You didn't ask them if they had been good boys and girls! You never once inquired what they wanted for Christmas! Because the experience was quickly becoming a merry ole beating, I asked them to just sit with you so I could take your picture and we could leave. I guess because I wasn't paying $46.97 for a 5X7 photo, you were unable to see me and therefore didn't know where to look, because the photo I took has you looking off in the distance. I was so frazzled by the whole experience that I forgot to even put our newest addition in the photo too. But, then again, what would have been the point? I would have hated for your grumpiness to leave an imprint on my precious baby's first Christmas. I will have you know that because of the way you acted, I was bound and determined that my children would see a HAPPY SANTA, and I told my husband that we were going somewhere else. This of course led to the hissed discussion behind their little backs, of how are we going to explain Santa being at two different places at the same time. You are SOOOO lucky that Olivia is still 6 and believes in Santa with all her might, because the one word answer: Magic, was enough for her. I simply explained to her that having all that magic can sometimes wear a Santa out, and I guess that was just the case with you.
I am ho-ho-happy to report, that my husband knew not to fight the "Seeing-Two-Santas-Within-30 Minutes-Of-Each-Other-Is-Insane Battle", so we joyfully loaded our sweet children back up in the car and hauled holiday ass through the blistering cold to the beautiful glowing beacon in the night called The Shops At Willow Bend so we could get there before their Santa left for his snack of milk and cookies.
There we found the REAL Santa. The one who winks at you when he sees you waiting in line! ("Mom! Mom! He saw me! He winked at ME!" 'Makes me teary just remembering it.) The one who KNOWS YOUR NAME by the time you sit in his lap! The one who smiles and give you kisses on the cheek! The one who knows all about Pet Shops, and knew that a Thomas was Thomas the Train! The one who compliments you in front of thier parents, and comments on what a great kid you have been all year- because HE'S been watching! The one that wears a REAL frickin'-frackin' Santa suit! With jingle bells on the boots! And "Claus" embroidered on the belt! I gladly paid this guy $20 for a picture with him and my children because he made their day. I am enclosing this photo so you can take a moment to notice the crazy happy smile on Olivia's face and how sweetly he is holding Morgan's little chubby hand. You might want to take a lesson from his guy, he's the real deal and we will being seeing him every year from now on.
Sincerely,
The Yarbrough 5 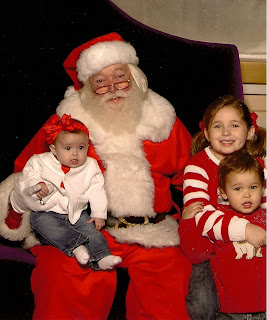 Wow what has Santa come too these days! So glad you found a happy Santa to see! I haven't tried it yet, b/c I am fairly certain that my beautiful 16 month old son will have NOTHING to do w/sitting in Santas lap! ;-)

Congrats on a CUTE pic! Looks like Miss O was LOVING it!!