It's okay, I finally stopped crying around 6 pm... 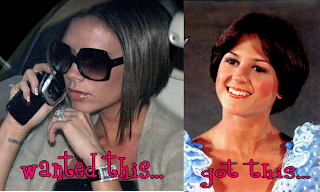 So...Jas was home this morning before work, Olivia had Ashton over and Bubs was (shocker) watching B.T.B., and I decided to go get my haircut. There are SO many cute mommies out here with adorable hair and I was tired of schlepping around town with my hair in a poof on top of my head (a.k.a. no style whatsoever). I went into a nice salon up the road and had a big talk with the guy about what I wanted, what lengh, how I have a TON of hair, blah, blah, blah. I was thinking sort of like Ni's when she first got it cut- a slanty bob basically. Yea...not so much. It was really great looking until he started layering it, which in my hair's case means making it into a mushroom! All of the chic slanty-ness of it went out the window and Dorothy Hamill flew back in. DAMN IT ALL TO HELL!!!! Why can't I EVER get the haircut I want???? Why do I ALWAYS spend 3 months waiting for it to get to where I can stand it??? I seriously had a meltdown- especially when Jas said the dreaded sentence, "I just have to get used to it." Which is code for "What the hell have you done???" Great. I am hoping that it will have fallen, straightened, something by the time I have to see any of yall again. Nice. And don't ask for pictures, because you won't get them.
Posted by Anne at 10:49 PM

I'm so sorry.
I feel bad that I didn't give you the 'Never cut your hair when highly pregnant, because you will hate it' lecture. It just never works out.
But this too shall pass.

I loved it that Little Boy called our house and then handed you the phone: "Talk to Mimi". Genius.

I'm so sorry. At least you didn't attack it with scissors and make it worse like I did the last time. Now that was tear-inducing.

Oh Anne, you have cracked me up and scared me all at the same time! I am glad it is finally growing out...