So I'm giving Bubs a bath tonight, and between being splashed every two seconds and convincing him that it is, indeed, better to sit than stand in the tub, I start to think about all the crazy changes that have occurred with our little man since we got out here...While on the road, he didn't have one bottle, much less even ask for one, so PRESTO: No more "bahbahs". That was easy... Then as of last weekend, he decided to start speaking in REAL sentences ("I outside, too", "Go see G-Daddy", "NONONONONONO") It so fun- but kind of sad: He's getting so big! 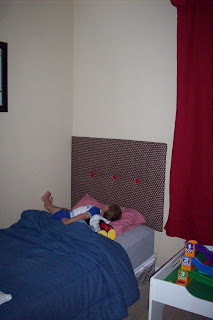 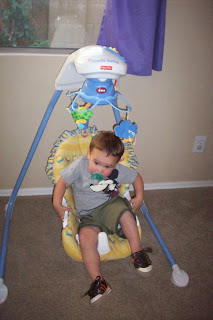 And to then to top it off, his crib broke when it was being put back together, so he got upgraded to his "Big Boy" bed a little sooner than we had planned. He has done really well, but we have realized that we never really have WATCHED him fall asleep before. We have to sit with him until he falls asleep now, and WHOA! There is a lot of acrobatics involved in him getting settled- and it always ends with his feet on the wall!???.... But, no matter how big he is getting, he has shown that sometimes you do need to still be a baby...
Posted by Anne at 11:37 PM