Luke and I have become faithful players of the card game "War", playing about 4 rounds a day. It has actually really helped him with math- recognizing which numbers are larger (or smaller) than others. And it goes pretty quickly. (Makers of Candy Land and Chutes and Ladders take note.)

So the other day Luke and I are playing, and Morgan Jane decided she needed in on the action, and shows up with this HUGE stack of Disney Princess cards that she found in the toy closet. She started looking through them and getting so excited when her favorites came up (Snow White! Cinderella! Sweepin'Booty!) Luke and I finished our game, and went on to do other things, but when I walked back through about an hour later, I found this! 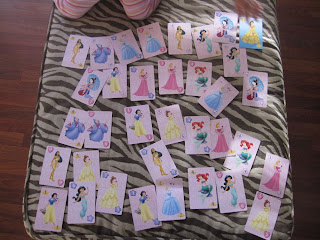 I'm not sure the rhyme or reason to it, but she had them systemically sorted out and grouped. When I asked her what she was doing, I got the now standard MJ response,"Nup-in!" But she would move them, sort them and stack them over and over, the whole time I'm wondering what is the method to her madness: Brunettes together? Cinderella next to Fairy Godmother? Movies she likes vs. Movies she doesn't care for???? 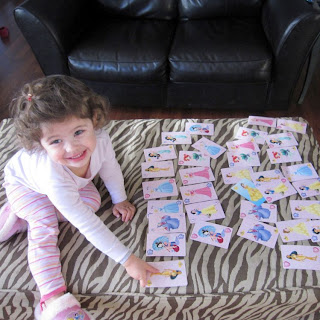 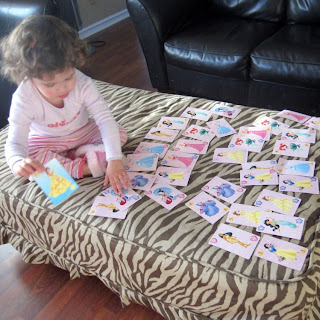 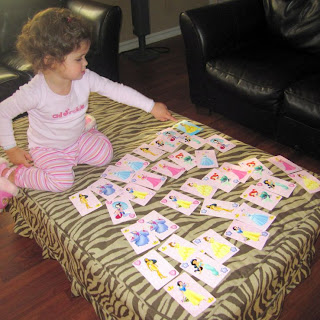 Then she looked them over for a bit and started pulling some off the ottoman, and onto the floor. Not sure if they were VIPs or were being banished! 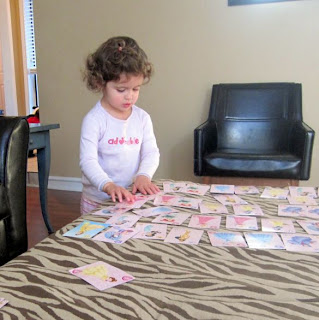 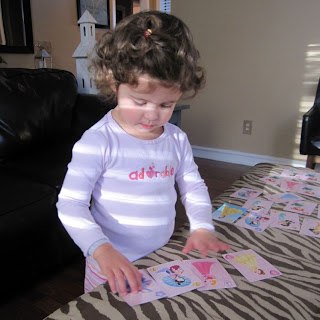 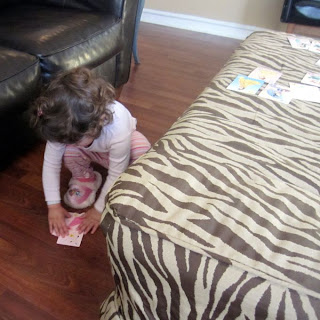 It was only a matter of time before the Disney Princesses took over our home. (Note her footwear!) Morgan Jane LOVES THEM. Knows them all by name, and what color they wear. Who their friends are, and who is mean to them. I just have to make sure, like we always emphasized with O that: You must be beautiful on the inside to be truly beautiful on the outside.  Don't need any wanna-be-diva-princesses on my hands. Yikes! She was a fabulous Snow White for Halloween. 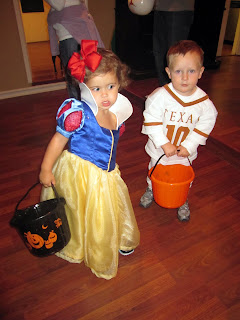 One of the sweetest Princess-y things she does is twirl and sing what we affectionately call the "Princess Song" (which is basically her just singing a bunch of "La da daaaaaa"- its soooooooo great because she gets so serious!) I will try my best to capture her performing it as well as her and Jas doing their "Princess Dance" too. Priceless.
Posted by Anne at 9:47 AM

I'd have to guess that no matter the method to her madness you were just thrilled she was playing so well on her own!! SO cute about all her princess trivia knowledge. I wish Laurel would have like princesses a bit longer...but she's a stuffed animal/petshop loving girl. Can you tell she's the last of all boys....sigh...

I wish Laurel would have like princesses a bit longer.