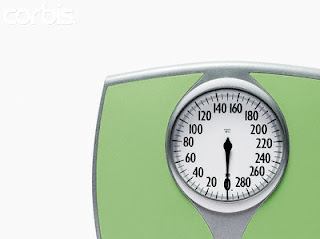 ...and that's a good thing! Some friends and I have come up a weight-loss challenge to kick off the New Year, and our first milestone weigh-in is in about 2 weeks! I saw on the Yahoo main page that people who blogged about, or wrote down what they ate and their struggles, lost two times as much weight as those who didn't: sooooo, I'm all for giving it a try! I would like to loose 15 pounds- which according to every health-nut-weight-loss-motivating site is totally doable by March 31st. And by loosing those said 15 pounds, I would possibly gain $600!! Motivation, baby! Motivation!


My official putting it all out there goals:
Over the past two weeks, I have become so conscience of what I used to eat and how much of it- and realized I was running on sugar-highs rather than protein. I had to do a mini-sugar withdrawl- only allowing a tiny bit in my coffee and whatever was in my FiberOne bar. Then that was it for the day. KIL-LER. I really felt ill and miserable for about 3 days. But once I got through it, I have been able to really tame that sweet-tooth. If it really gets to me I'll eat a tiny box of raisins, but that is just so sad and NO fun, so I usually just get over it.

One of my competitors and GF Andrea and I are also doing the "Eat Half" method- although that was NOT happening last night at Girl's Dinner! (Too much wine and too many carbs!!) BUT we are also adhering to the "90% on/ 10% off" rule which give us wiggle room to cheat once a week. I have invested in about a billion Lean Cuisine freezer meals (NO PRESERVATIVES!) to help with my eating choices and portion control. So far so good! I know that eating my kids leftovers and not being prepared and running through the nearest drive-through have been one of my major eating flaws, but they have been noted and ammended.

oh you are so good! my new year's resolution was to exercise more and that hasn't happened. I haven't made finding time a priority....I always feel so far behind with too much to do. I'm going to keep trying though!! Good job to you...sweets are totally what get me all the time. I've tried to remember popping a piece of Extra gum in my mouth so I can't cram anything else in....sometimes it works....sometimes it doesn't!