My New Year's Resolutions this year: sew more, play more and work out more. Its day 17, and I am successfully on the right track.

My first sewing project of the year on the new machine: I decided to bite the bullet and make a decision about the bedding/ decor in Luke and Morgan Jane's rooms.
Jas and I put up molding and painted their room back in October ala Thrifty Decor Chicks color scheme. LOVED the crisp white and the great dark blue. I thought it lent itself to a nice Americana kind of feel, but them went back and worth about maybe an ABC theme: 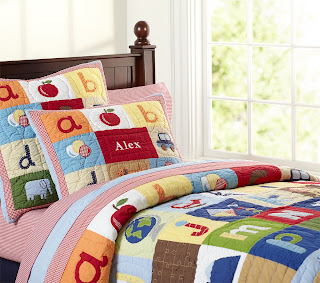 ... Couldn't make up my mind. Its pretty tricky to design a shared room: who do you lean more towards? Girly or Boyish??? Well, I have always loved this cute cowboy print by Michael Miller. 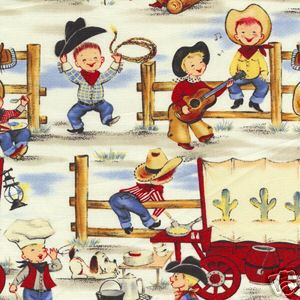 I've used it a bunch on gifts I've made, and when I ran across the GIRL version 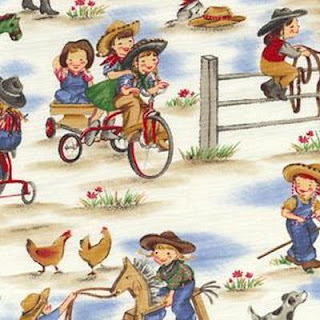 I knew I had to have it!!!
I had already made them matching red duvets (thank you WalMart for your $6.00 twin sheets! $24 for both covers? SCORE! )And I had snagged some great solid sheet sets from Target right after Christmas. Luke has a favorite PBK red gingham pillow case, and the color scheme was already working for the cowboy prints. I had a red gingham PBK crib sheet that I had held on to for days just like this, which quickly became a matching pillow case for Morgan Jane. I decided to make them both king-sized pillow shams out of the cowboy print. Luke's sham needed to be piped, and Morgan's needed ruffles- and then remembered I had bought a random roll of chambry pre-made ruffles, so I knew I could incorporate those in her throw pillows too. I am a serious throw-pillow-form hoarder, and had two matching sizes that just so happened to be the exact size of a bandana!!! Seriously!! So I bought four chambry bandanas from my bff Hobby Lobby and stiched those up in about 5 seconds. I monogrammed both of their pillows with their names and then made MJ a little girl-y ruffly pillow out of the pre-made ruffles. It was a TOTAL pain in the tush, and I am not in love with it, but it sort of reminded me of a ruffled western skirt, so its staying for now. 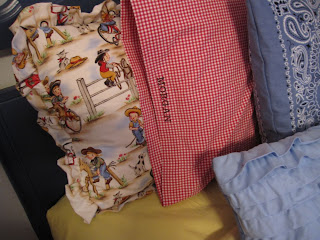 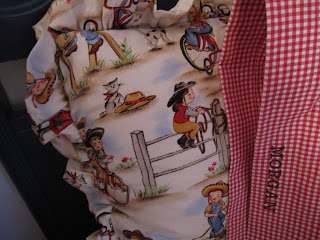 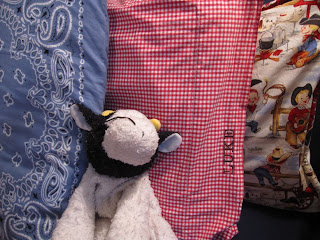 The kids have three windows in their room that go almost all the way to the floor, but since MJ's bed runs in front of one and a half of them, roman-shade-ish window treatments look best. When I bought the cowboy print I also picked up some basic blue chambry and some additional red and white gingham. I thought it looked a little cheap, but one I washed it it plumped up a bit. I made piping with the gingham, and sewed the chambry doubled up, since I knew I would be rolling it up and wanted a clean look on both side. I made the ties (all 12 of them-ahhhhhhhhhhhhhhh!!) our of the gingham and voila! Cute roll-up shades. They are hung on the tension rods tucked up under the window casing. 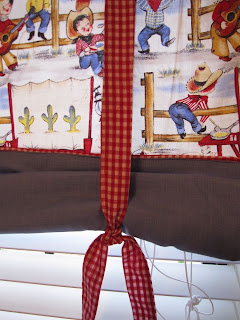 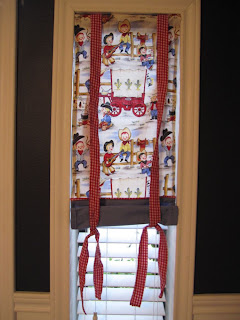 (don't worry, I untwisted the tie on the right)
I am now on the hunt for some great accessories: I have plan to have a large poster made from this print 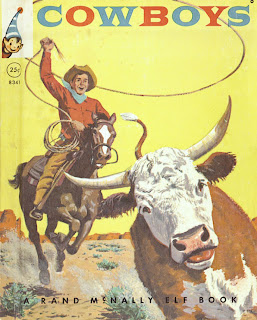 and will work on getting some vintage-y toys to put up on thier shelves.  Think more this: 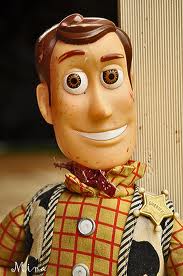 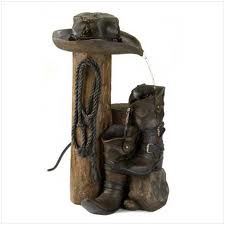 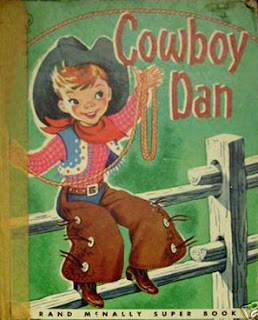 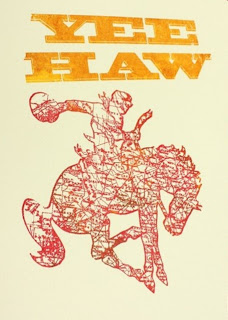 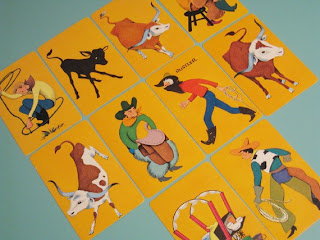 I'll update the progress as it occurs, until I'm off to 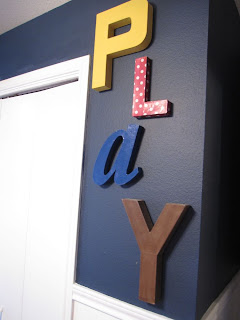 can you please.....please move to NM?! Love your ideas!