I have never in my life been afraid to get up in front of people and talk, or dance, or talk and dance (which I'm not sure ever really came in handy...) So why is it that my children, my precious off-spring that do have some of my DNA refuse to perform in from of people???

We went to Luke's preschool Christmas program yesterday- so excited to see the precious little costumes and hear the adorable little songs. Well, we got there, got settled and in they came.... 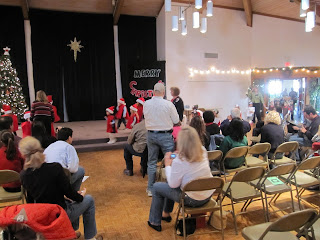 SO CUTE! He had told us he wa singing a song about candy- but I just thought he was being a toot. Turns out he was telling the truth. They were dressed up like Hershey kisses and peppermints- complete with little headbands! So he is all smiles, and then turns and looks out at the audience. And his eyes got huge. They start the show with all of the classses singing together.

We waved at him and blew him kisses, smiled and give him thumbs up- anything to break him out of his 100-people-looking-at-him-shock. No luck. Then its his class' turn to sing their special song. He turns and stares at his teacher- sending a silent SOS with his saucer-sized eyes. No luck. She just keeps smiling. The music starts, his class starts singing and he starts screaming crying. We are talking full on body-shaking, hands in the mouth, get me the hell outta here, crying. And his teacher keeps smiling and singing, hoping to snap him out of it. No luck. 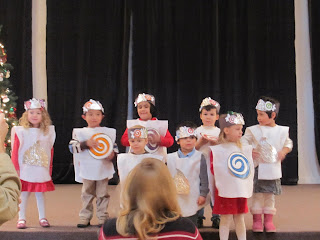 (See that open spot- bottom row, left?? Yea.) So half-way through the song she walks him off the stage. He then proceeds to cry very loudly during the next classes' song. So at this point, as much as I hate to be "that mom", I go over to where he is sitting with his teacher. He looks in the the eye and between sobs says, "I. want. to. go. hooooooome!!!" Poor guy. He was totally traumatized. I was able to convince him to sit with us until the show was over. Look how sweet they all are! (Don't you just love that one kid that always yells the songs??) 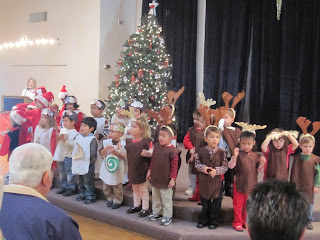 Then we went to his classroom for cookies and juice, and he was instantly 10 kinds of bright and shiny: telling us he was so glad we came, asking us if we liked "his show", singing the songs he was supposed to have performed. 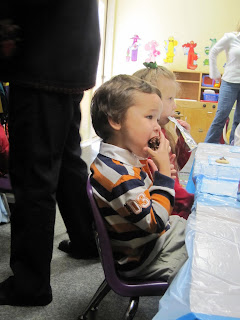 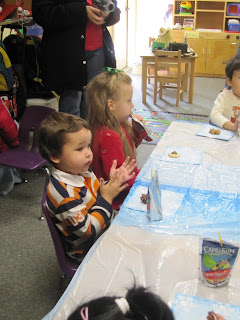 His sweet teacher just smiled and rolled her eyes, telling us, "See- he was really excited before he realize the whole world would be watching him!" Ahhhhh! At least we didn't ask any grandparents to fly 1,500 to watch this non-performance...

I could share some seriously funny pictures with you. My oldest (now 9) HATED singing of any kind in preschool. Refused. She didn't cry, but she'd look miserable and wouldn't perform. Honestly, that hasn't changed much. She'll dance in a competition, in the talent show, anything like that, but even still she looks miserable in the music program. Just not her thing I guess, but I was a huge singer when I was little so it's kind of odd to me!

Like I said on FB...we so know how you feel. laurel is really the only one to never suffer the fright of performing in front of way too many people at an early age! G and J's first Christmas performance had then dressed up as animals and they came up the aisle looking at the floor and sang not a word! Good memories!!

Austin had a similar experience at his!! I've got to get it downloaded to my blog! Maybe this weekend! LOL!! Silly Boys!

OMG! That is so funny Anne...poor little guy.

Poor little guy- he was just breaking my heart.
Yes, thank goodness we only came 1/2 mile down the street for the non-performance.
You know what,though? I bet Morgan will be that kid who belts out the songs and bosses all the other kids around on stage.
Or not.