(Okay, roll your eyes, but here come another Luke-Being-Luke post:)

Jas and I were feeling all HGTV awhile back, and decided to put a large chalkboard on the door that leads out to the garage. (High five, Babe! It turned out great!) So then for the next few days the novelty of being able to write on the door was so fun for Jas my kids. They drew pictures, made silly notes... 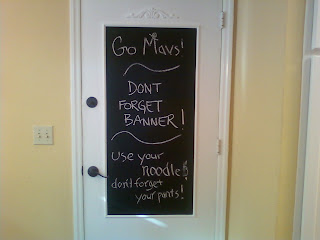 But now that that has settled down, I use it practically everyday so I don't forget things as I'm walking out the door. Its been a lifesaver!

Well, thanks to "SuperWhy!", Bubs is OBSESSED with the alphabet ('Rainman' as we affectionately call him, can't walk past a sign without spelling it out and then wanting to know what it says and why.) He loves things with exclamation points, and any "No" sign (aka the circle with a line through it.) I can think of worst things to be obessessed with, so we indulge him.

So, Bubs had snack duty for preschool this week, so of course I wrote myself a note on the chalk board. Wednesday night at dinner, he noticed that his name was written up there and wanted to know why. I told him it was there so that I didn't want to forget his snack. Then he wanted to know why I had drawn a line under it. I told him when people underline things it kind of says, "Don't Forget!", it makes it important. Now, for the record, I answer this kid quickly and thoroughly anytime he asks me something. Short and sweet and I move on. He? He stores it away.
Then this morning, I came in and found him "writing" his name on the bottom of the chalkboard. I told him he was doing great, helped him write a lower case 'k' and 'e', and went about making coffee, packing O's lunch... I start to walk out of the kitchen and then he says, "Mommy, wait!" and he underlines his handi-work. 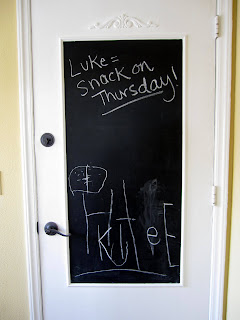 I'm not sure if it's the copious amounts of cold medicine I just took or not, but that story made me cry. Y'all are SO SWEET!