Santa Love And Some Cheese

We saw Santa today!!!!!!! The kids were troopers getting ready and getting out the door so we could get there nice and early to score an early place in line!  Once we got there, we had about 20 minutes before Santa was going to arrive. Check out Luke's impatience after being in line for about 2 minutes: 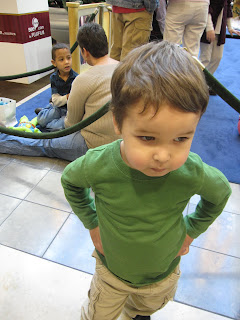 So Jas took the kids to the play area and Mimi and I held our spot. It seriously cut down on the stress of keeping them occupied, but I was sad that they missed the Big Guy's big entrance! 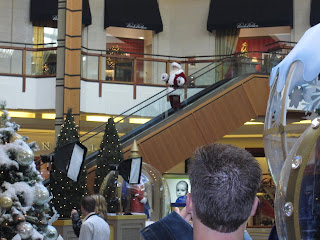 Once the line started moving, I texted Jas and they came right back and we began our little journey through the Polar Express train. Before we begin the fun, can you please take a moment and notice this new face of Luke's: 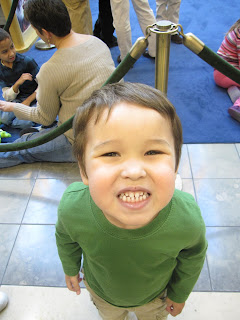 Okay: On with the fun! This mall has really cute snowglobes filled with scenes from the Polar Express, not to mention really beautiful trees and decorations. It really helps that the kids have things to do and look at while they waited...

Really? Again with the face?!?! 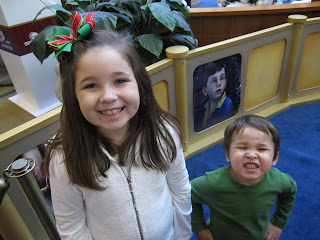 Trying to get a cute shot by the bea-u-ti-ful tree: 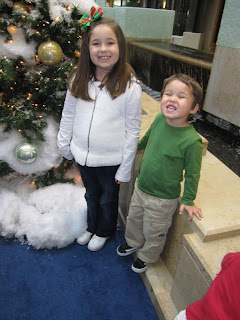 Morgan Jane checking out the "snow"... 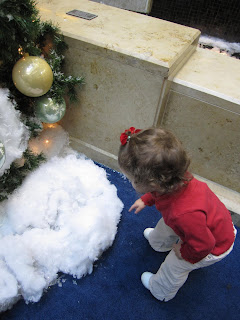 She just kept laughing and pointing at it! This is her new thing- the pointing and making the "Hey! Get a load of this!"-face. So cute. 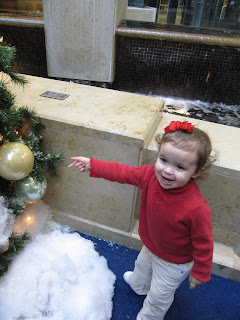 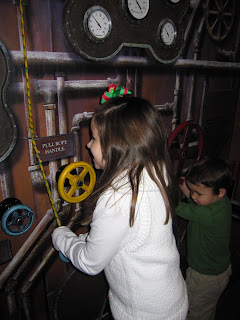 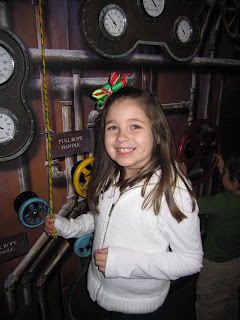 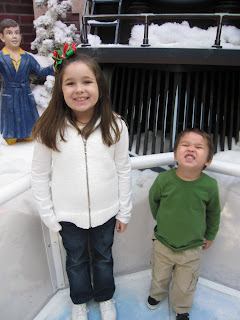 Luke asking if he can throw the snow- such a boy! 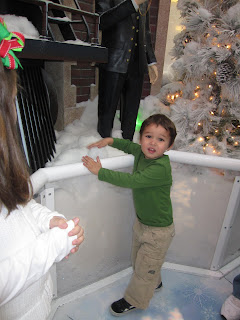 Luke begging to throw the snow... 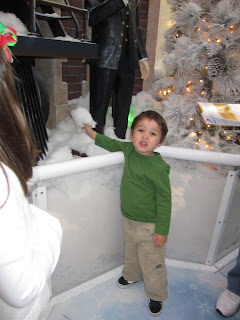 So then it was our turn! I love that this group comes and writes down your kids' names on your photo order form way before you get up there, which you then hand to the photo guy once its your turn, who excitedly welcomes your kids by name, therefore telling Santa their names. Genius. I'm telling you: these people are the Porches of Santa photo-takers.

Sweet Morgan Jane walked right up to Santa and started clapping, saying, "Tanta! Tanta!"- we had no idea she knew who he was! She practically climbed in his lap on her own- which was a nice suprise considering the kids that went before us were a crying mess. Miss O took her rightful place next to him and they started chatting. But, poor, poor Bubs. He has been having some stress about the "Naughty" list, and wouldn't sit next to  Santa until we got confirmation from the Big Guy that yes, indeed, he had made the "Nice" list.  By this time, Morgan Jane was sitting on Santa's knee and kept pointing up at him and then looking at Jas and I with her mouth open, like she was saying, "Ha! Do you see this guy!?!" And of course, there was more clapping.

We asked him if there was ANY way he could come a little early on the 24th since we won't have time to open our presents on Christmas morning. He asked me why and I told him that we would be leaving for Disney World, to which he replied, "Well, how horrible for you!" and winked. Ha! He said that his only concern was that the kids had to be sleeping for him to come, so we struck a deal that we would be out of the house- which works perfect since we are having dinner at my parents' so one of my sweet siblings can sneak out and play elf sometime before we actually eat! WHOO-HOO! Mission accomplished.

Then the issue of the Zhu Zhus came up. Olivia asked him for some- telling him that we had told her that they were no more in the stores. Now here comes Awesome Santa Moment #158: He looked at me while saying to her, "You know there aren't very many left..." (Then I winked at him) and he quickly said, "but if I can muster up anymore, they are going straight to you because you have been such a great girl this year." LOVE. HIM.  Bubs asked in for a "Fix-It Thomas" which, after we dropped the kids off with Mimi and went searching for, we found out retails for over $100. Yea. Never going to happen- especially since he doesn't even play with toys. So we found him a FANTASTIC Black and Decker plastic tool set, to go in his new toolbox thanks to the fabulous Cokers. We'll just tell him that Santa must of thought he had said, "fix-it toools..." He's 3. He'll buy it.

We all left in a fabulous Christmas mood- and Jas and I finished up all of our shopping! Yea! All I have to do now is finish wrapping all of our gifts, make our stockings, get the Christmas cards in the mail, wash every stitch of clothing we own.... Oh, and maybe clean the house, And make preparations for the dog. And check on our flights. And.... 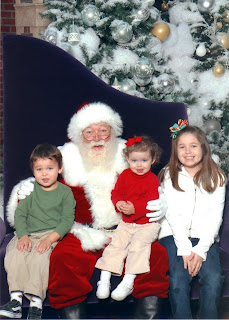 AWESOME STORY! That Luke just cracks me up!! I can't believe ya'll are going to Disney christmas day!! That is SOOO AWESOME!! Have a fabulous trip!!

AWW Anne, that is such a great post!! Love how cute your kids are and what a fantastic Santa...that guy deserved a big ol' tip! I hope you keep your sanity over the next few days and I wish we could meet up in Disney World! If panic overtakes you and you need any last minute Disney magic tips, give me a call!! hugs!

omg. that first pic of luke looks just like the way i remember jas standing...so funny but that second...he doesn't even look like luke! so glad yall had fin. hudson hates santa!

LOOK at that perfect picture. All three kiddos are darling and the Santa is adorable too.
Those faces of Luke's kill me. Such a charmer. But that first pic of him made me 'Laugh Out Loud' even though I'm sitting here all by myself at the computer. Thanks for the smiles.
Merry Christmas,
M.L.