Everything Happens For A Reason

So, I love when something happens and you can stop and look back and see that little things fell into place to make that one big thing happen. It always confirms for me that everything, big or small, happens for a reason and we need to roll with the punches. Someday, it will all make sense...

When Gary was sick, one of his wishes was that some of his ashes would be spread out at the Pebble Beach Golf Course in California. He had wanted to play there his whole life, and finally got the chance a few years back with his oldest brother, and best friend, Bob. They were blessed that day with not only beautiful weather, but the man they were paired up to play with happened to be there with his wife. Who happened to be an incredible photographer. She took some of the greatest photos of Gary and Bob, and was kind enough to later send him a CD of them all. A treasure we will all keep. Proof of their incredible time. Golf was something that he loved almost more than all of us, and it was fitting that part of him should stay close to the Earth, on a golf course green- something that is just a bright and full as life has he was.

After Gary passed away we were at odds with how in the world we were going to a)Get out to California, b)Get on the course itself and c) Not get arrested. There were a lot of detail to work out and we just weren't sure we could ever make it happen...

Then this happened: After much deliberation, Jason's brother, Jon, left the girl he had been caddying for for years on the LPGA circuit, and began working for a new guy who plays for the PGA this year. He played in the Phoenix Open a few weeks back and Jon was able to get half of Gary's ashes while he was staying there with Martha because....

Here is where the story gets good:

Guess where they will be playing this weekend? You got it. Good ole Pebble Beach! Its part of Jon's job to walk the course days in advance and make notes for guy, and lets just say he happened to take more than his notepad and pencil when he went out this time. He was able to spread Gary's ashes on the 18th hole that overlooks the ocean. A perfect place. Just what he had wanted.

Thanks to some little things, Gary got his big wish. And I can't tell you how much that means to all of us. 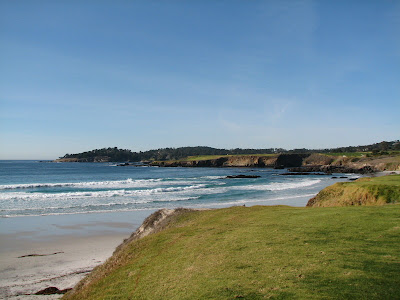 It was meant to be. Definetly a God thing. I hope it helps all of you. Love you - A

What a special post. God has a way of working the details out that show he really cares.

Thank you so much for your thoughtful comment on my blog after my grandfather's death. I miss him and still can't believe it happened.

What a beautiful story.