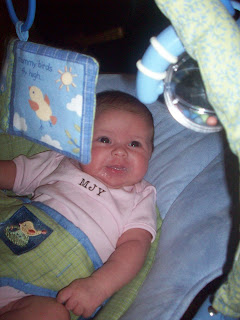 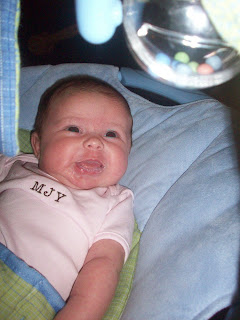 CHECK OUT SMILEY GIRL! Sure, she's got milk dripping out of her mouth, but look! A real, full-on cheese-face SMILE!!! Who knew little balls in a big ball were sooo funny??? Speaking of balls...

When Olivia went to the dentist for her first go round of teeth misery, she got a super sticky koosh-like ball on the end of a long sticky string that you fling and it will stick to stuff- remember those? WELL! Bubs instantly gave it the ole "Mal de Ojo", and later that day they string broke and O lost interest, so she gave that ball to Luke... So started the "Schitkeesh Baalsh" love affair! He loved that thing! So much so that when Olivia got a new one at the second go-round of teeth misery (the same color, mind you), he snuck in her room and BROKE OFF THE STRING- and lo and behold, she gave him that one too because she just thought -it was first one! We were talking about these silly balls one day, and then Martha found a whole package of them in the party favor aisle of Target. We used them to bribe Luke to eat his dinner, only to find out that the kind she has bought were not sticky- but he didn't care!!! He keeps them in a red solo plastic cup and will sit and play with them for hours on end! SO RANDOM! The best part to me is how he says "sticky balls"- I got it on tape so you can hear his precious little lisp!Everytime he says it I think of that SNL skit about the "Schwety Balls"- ahhhhhhhhhhhhhhhhh, so funnny!
Please say a little prayer for us: We are being Nazis about Luke's nap time and bedtime, trying to get him to a) have a nap time/ bedtime (seriously!) and b.) go to sleep by himself and with no TV. Let's just say it hasn't been a walk in the park. But it must be done. We were a strong united front about the bink, so I know we can do it. It just sucks in the meantime. UGH! On a happier note: I FINALLY got footage of Luke busting a move! I know I have been raving about his mad dancing skills for awhile now- and while it is not to the song he loves the most, it is still HILARIOUS! We are totally impressed with his musicallity! Watch for the move where he sort of slows down and moves his arms and shoulders with a "Stevie Wonder" head bob- PRICELESS! Sorry its sideways and so dark- I wasn't thinking about camera orientation and lighting when trying to "catch the moment"- I really tried, but can't figure out how to turn it...

That is the funniest thing I have seen in forever. Bonus points for the Kids Incorporated-style cover of L'Trimm's "Cars That Go Boom". Tigra and Bunny would approve.
This is one of those moments he'll look back on when he's 30 and be like "Damn, I was cooler when I was 2 than I am now..."
Love,
Uncle Trav

I see he knows his colors now.
Happy, dear?
This is the cutest ever!

mom
off to see the flower shop...