I am thankful...
...That Halloween was on a Saturday this year, so I had plenty of time to get things ready and that my children had an incredibly fun night with their friends...
...That while I did not have a decent camera to take their picture on this, my favorite of all holidays , I was able to get a few along the way with my fancy new phone! (I still might re-dress them up and take some pretend ones, so just wait...)
...That my husbands and friends have been patient with me while I learn how to use said fancy new phone, and don't kill me when I send them 15 blank text messages a day. I'm workin' on it, I promise!...
So Now, Without Further Ado!: Yarbrough 5 HALLOWEEN 2009
Getting Ready For The School Carnival
(Footwear was an after-thought this year- SO not like me!) 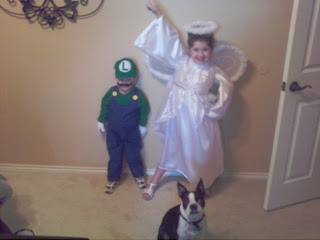 Olivia and Morgan, Waiting For The Cake Walk 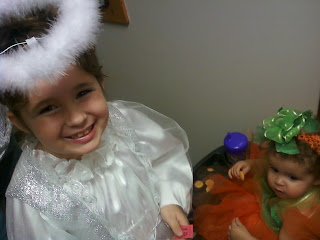 "Its Luigi Time!" (He was so angry about this mustache! The kid on the package was dressed as a magician and he thought that I was trying to pull one over on him! "This is not the right one!!! I am not a magician!!" Such a diva!) 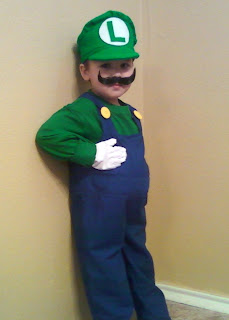 Everyone liked Bub's costume so much, Morgan Jane decided to get in on the act! 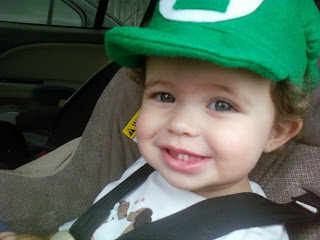 Our Jack-o-Lanterns! I went out on a limb and tried to carve just the top layer to make the detailed Romo and Luigi ones. LOVE how they turned out- Don't think I'll ever go back to the traditional carved style! Check out Miss O's avant garde skeleton in the middle- So Artsy-Fartsy! 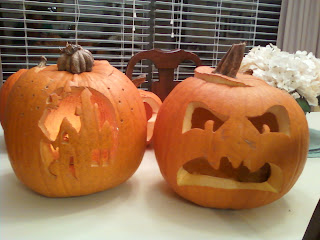 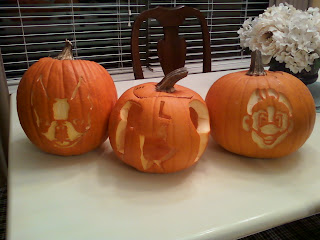 It wouldn't be Luigi Time without a mushroom trick-or-treat bag for extra speed and power while out collecting candy!! (God bless felt.) 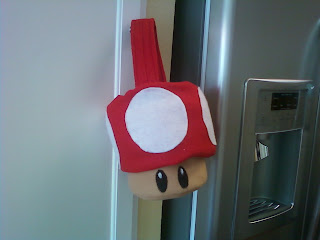 Morgan Jane and Kane- You can't tell from the pic, but she was CRAZY excited when he showed up! So adorable together! He's checking out the tutu-extravaganza! 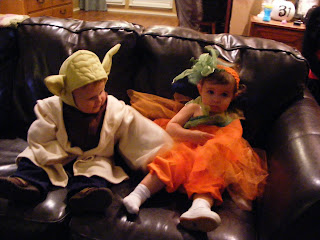 Jas decided last minute to be an old-school golfer. Thank God I can sew, and whipped up a pair of knickers for him 30 minutes before people started showing up! Here is Morgan Jane modeling his fabulous mustache at the end of the night!
(Why do we always do this to our poor baby???) 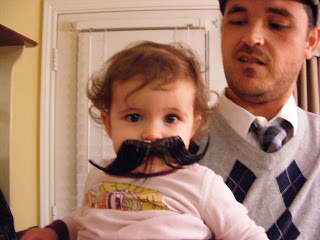 love it! i was sying to see and it was well worth the wait.
i need to start practicing on my sewing skills...you are AMAZING!

whipped them up 30 minutes before people started arriving....are you superwoman or what?!! I am always so impressed by those that sew! The kids look very cute.....Luigi was 'the' costume this year!!

Your costumes turned out AWESOME!! Love Luigi!! Super cute! I think you need to host a costume making day next year!! I'd love to make ours too!

YEAH! I have been wanting to see these for days!!!!!! SOOOOOOO cute! Luke looks precious. I love the gloves. And the mushroom. And Morgan looks adorable, the mustache is hillarious. Take another pic of Jas's pants.

You know, if you keep this up, Morgan will one day come to you when she's 14 and demand to know why you kept taking moustace pictures of her. Hysterical, regardless.

The deceptive one of Morgan and Kane on the couch: "Hey, baby- what's your sign?"
Love it!
When she was really sooo entranced with him, you said.