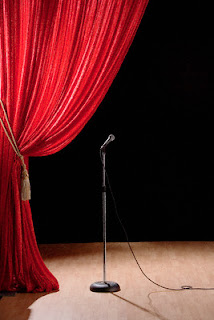 Its seem like lately, Luke has been pouring out the knowledge and random facts his little brain has been soaking in for the last 3 years. He knows all of his A, B, Cs and likes to spell out the names of the stores before we go in or the titles of the books we read at bed time. I don't remember Olivia being so obsesssed with letters, I just know that the Montessori teachers got them in her brain in the most fun and inventive ways. But the things that has all of us tickled is his new singing.
He will rock out a tune- and seems to know the "style" of the song so that is performance is genre apporpriate. The other day I had music playing in the house and "Three Little Birds" - the Bob Marley version came on- and he started singing. Every word and with great inflection. So of course everyone stopped what they were doing and had to join in. Such dorky fun.
And then last night we were coming home from dinner at my parents' house and "Im Yours" by Jason Mraz came on. And again- it was Luke who started belting it out, holding out the notes and even throwing in a little voice warbling when needed. We couldn't let him fly solo, so again- we all joined in and it was so fun. He was tickled and Morgan Jane thought it was hilarious! The Von Trapps have nothin' on us!
As I got him out of the car, I said, "Whoa, Bud! How do you know so many songs?" And he did the Luke shrug, and say, "Ahhhhhh, I don't know. Do you think I'm a good singer?" And I said, "Are you ever?! I love to hear you sing!" He walks into the house ahead of me and says to himself quietly, " I need to be in a talent show!"
HA! So in honor of his adorable thought- how in the world does he know what a talent show is???- I think we will be hosting the First Annual -well, maybe second- I think Olivia's concert counts since he helped! (Remember this flyer?) Yarbrough Family Talent Show this weekend. Stayed tuned for pictures... maybe even a little video. :0)
Posted by Anne at 8:14 AM

That is hysterical! Luke stories always make me smile!

Loved the Luigi picture. I got it while I was setting up the sound board with Coit, the director, and made him look at it. He thought it was pretty awesome.

so cute..I love to hear little ones sing. I doubt she sings nearly as well as your Luke.....but Laurel does have a fancy for Tayler Swift songs and Miley Cyrus 'Party in the USA' I think that might be kind of embarrassing to admit....hmmm....

I LOVED reading this post. Your little Luke sound like one in a million. What a cutie-pa-tootie!!
I got a big kick out of the post below with all the funny "pics"! What a great idea.
And then I had to laugh over your "Trashy Romance" post. Aren't kids wonderful? : )
M.L.