So Bubs and I hit up the 'Mart the other day to see about getting a little plastic pool to get him out of my hair so they could bask in the glorious sunshine. We saw the old school molded plastic ones outside for like, $10. Perfect. So we went into pay, and spotted these inflatable ones for the same price. Even better!

Believe it or not- Jas blew this thing up in like 3 minutes. I wanted to pass out watching him. 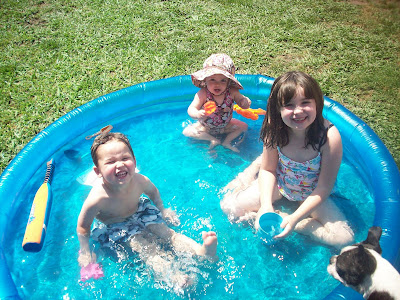 Brought back memories of him blowing up this thing. Again, in like, 3 minutes. 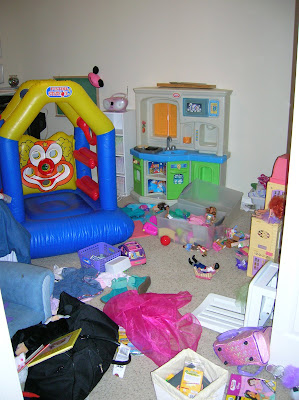 (Please note: This photo was taken after a tornado hit Olivia's room after a Christmas trip to AZ. We found her under a pile of stuffed animals and dress-up tutus. She was a little dazed, but okay overall.)

This pool was Morgan's first dip in water other than the tub. Lets just say, as cute as she looked, she did not enjoy herself. There was a lot of shivering, and crying. Then a little distraction. Then she would remember that she was shivering and would cry again. After she was in there for about 10 minutes, she was fine, but then she decided to try to crawl through the water and as soon as her hands touched the bottom, she TOTALLY freaked out. Frozen in fear almost. Okay, Times Up! I took her out, but O and Bubs played in there forever. I'll have to tape it, but you've got to see how psycho Mo goes when you turn on the house. Jas swears that all dogs do this, but its the most insane thing I have ever seen. 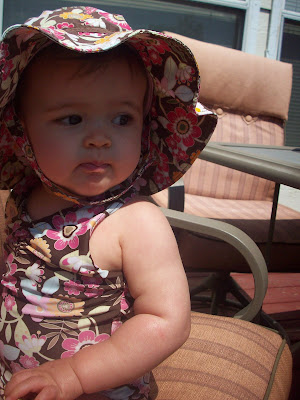 Want to see my Amazing Discovery of the day? We celebrated Luke's birthday at Nanna GG's yesterday and she gave him the cutest set of puzzles- there are four of them, all in packaged in a precious lunchbox with funky illustrations of fire engines and steam shovels on either side. Adorable. Anyway... He saw them on the counter this morning, and wanted to get them out. I gave him one that looked like it had larger and fewer pieces. I didn't know if he could do it since he didn't have a picture of the puzzle itself to look at. Whoomp! Done. Then he wanted the other ones, but I told him I thought they were too hard and he needed to wait for me to finish drinking my coffee so I could think clearly help him. He insisted that I get them out, so I gave him the remaining 3 bags and went to sit on the couch. I haf just finished my cup, when he said in that Luke-y way, "Maaah-m! See- those are naw-t too hard for meeeeeeeee!" Then he got up, asked for some Bunny Whop and was on his merry little way. I came back into the kitchen to make his BW and HOLY MOLY! He had done them all. By himself. I then said a quick prayer that this was a sign that he had great logic and deduction skills and that math would come so easy to him that he would NEVER have to ask me to help him with his math homework. Amen. 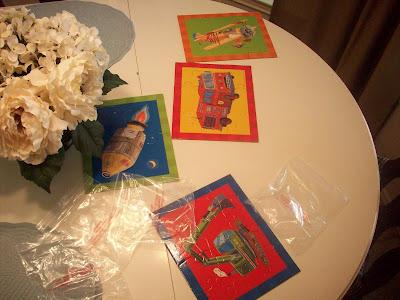 That pool photo is adorable!
I think he has Fan Sarah's spatial recognition ability.
Oh- and he's a genius.
(I am dying over the old Olivia room photo- remembering when it used to look exactly like that! Too funny.)

Maybe that's what Luke and I can do together: puzzles. Since he certainly won't let me build with him.